Have you been bombarded by emails, tweets, Facebook messages and even fictional evidences in your voice mail about doomsday prophecy?

Earlier this year, a poll by Reuters confirmed that one in ten is feeling some anxiety about Friday, December 2012. Later, NASA reassured us and media people guaranteed that the world is not going to end tomorrow. 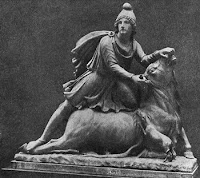 But, December 21, 2012 marks the shortest day of the year known as winter solstice and it had been a major holiday for ancient Romans and is still celebrated in several modern cultures with drinking, dancing, gift-giving, special food, bonfires and candles. So, let’s celebrate ending of the long count in Mayan calendar with the Persian god Mithra; the savior of the world.


On Saturday morning of December 22, 2012 go out, take a walk. Turn the music on and before going back to normal and start thinking of Christmas planning and celebrations, Stop. Remain still for a second or as long as you can. Feel free. Breathe. Enjoy the moment.
Posted by Marian White at 6:05 AM